You are here: Home / decor / The TV Stand and Curtain Saga Continues 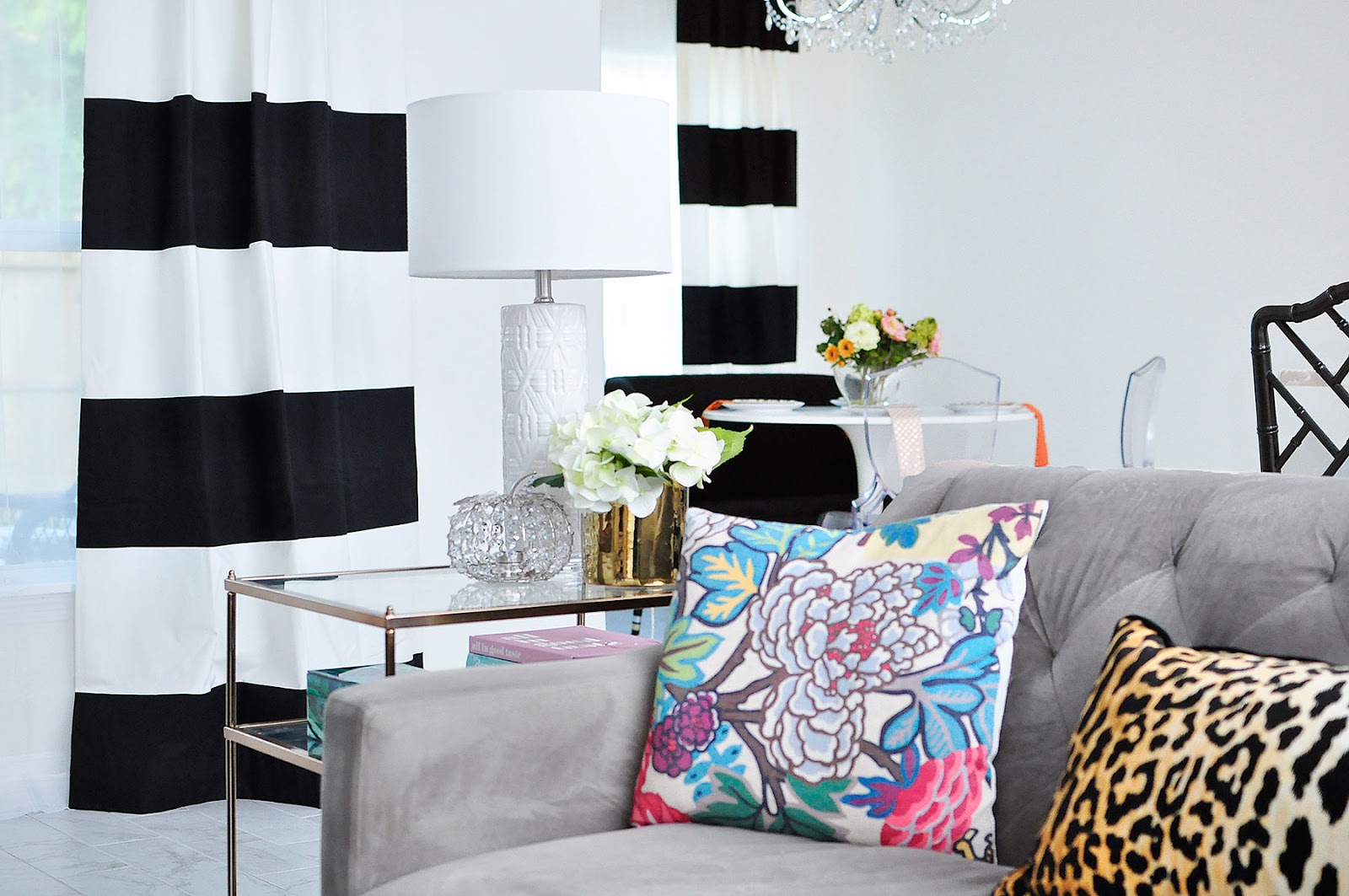 If you follow along in my Instagram stories, you’ll know I’ve been having a heck of a time with two things for my living room- the TV stand (which I talked about in my last post) and the drapery panels (which I originally featured here). I have updates about both, and one involves saving $1000+ and the other involves shipping back curtains yet again.

As you know, we really loved a Restoration Hardware TV stand, but couldn’t stomach the $3100 price tag (all in delivered, with tax). We ended up settling on a similar one from Furniture Row that came out to $1400 delivered. They attempted to deliver it about two weeks ago, and it was damaged in a corner, so I refused the shipment. They stated they’d have another out to my house the following Friday…and that didn’t happen. Then I expected it this coming Friday, and when I found out that ALSO wasn’t happening, I told Daniel I wanted to cancel the order.

Because when Monica is angry, she’ll do things out of sheer spite.

So. We I cancelled the order.

Yesterday on a whim (and in a panic, if I’m being honest…) I decided to see what Lowe’s had in terms of TV stand fireplaces, and I saw they have a 66″ one for $137!! It’s dark gray, has a “marble” tile border, fits TV stand stuff and was tall. They also had a similar one that was 59″ wide and even taller for $124, and I did the logical thing. 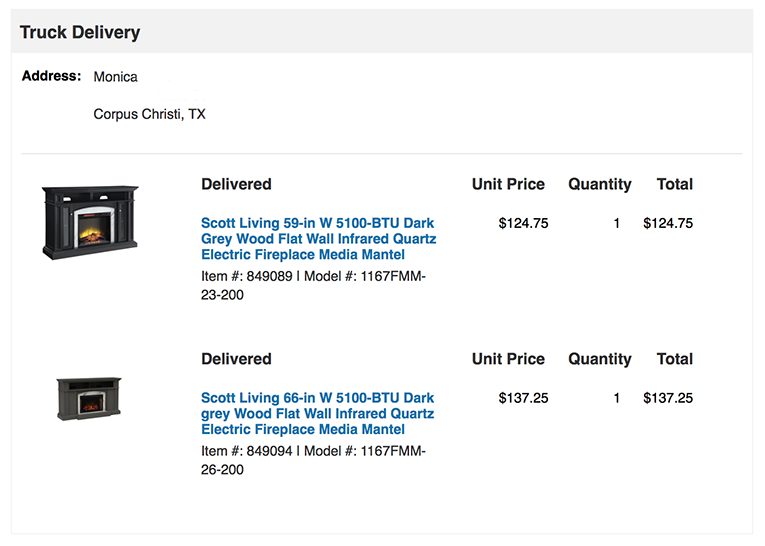 I bought both and paid for Lowe’s to deliver them. All in, I spent $336 AND got the refund from Furniture Row. If you do the math, so far we’re $1000+ ahead. Worst case scenario, we put the extra fireplace in our master bedroom or sell it.

You’re probably thinking to yourself (if you’re a long time reader), “isn’t that the fireplace she mentioned almost a year ago?” You’d be right. I’ve come full circle it seems.

You will all get to see the fireplace in place hopefully later this week, or follow along on my Instagram stories where I overshare and have frizzy hair ALL. THE. TIME.

The savings also means I can buy the leopard ottomans I’ve been eyeing from Grandin Road (they come out to $300ish for the pair, delivered): 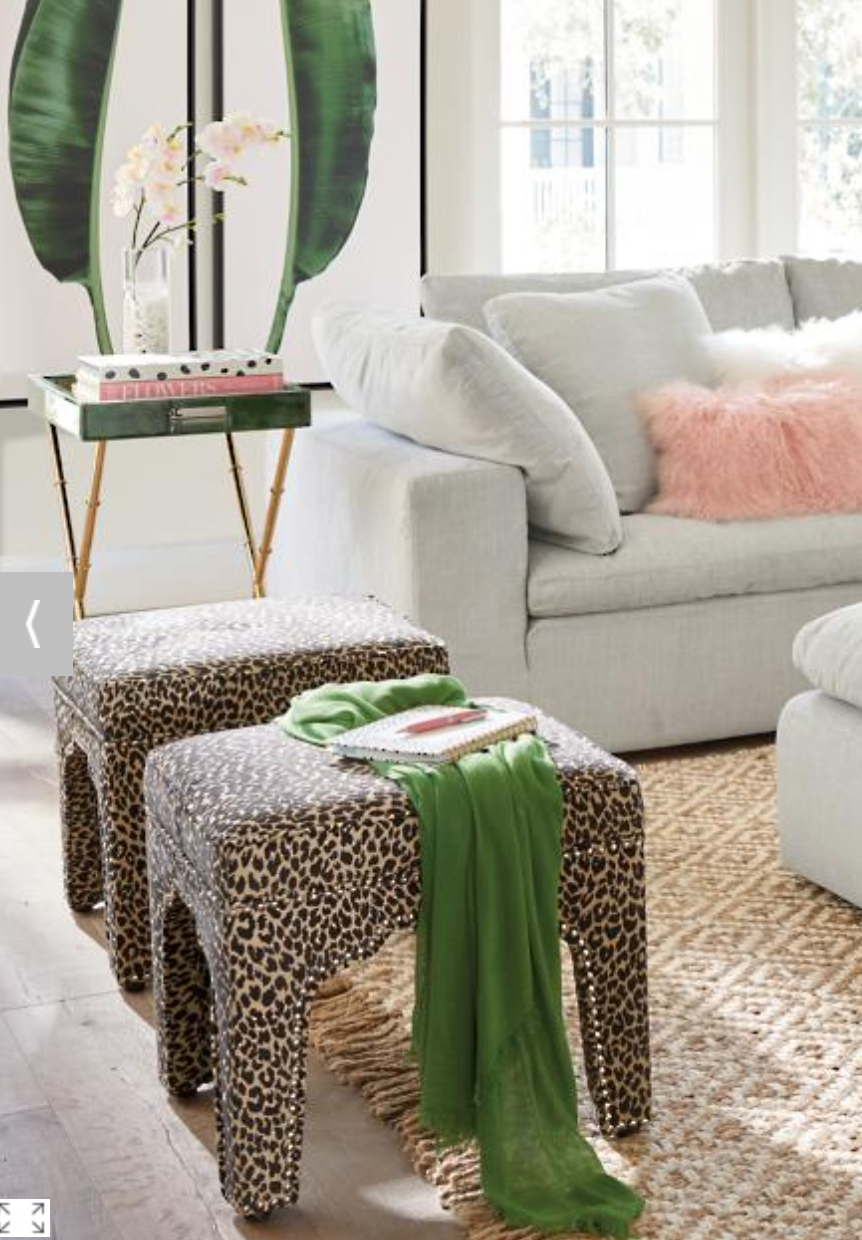 Really wanted the X-bench leopard ones from Ballard Designs, but at $500+ EACH, all the nopes. 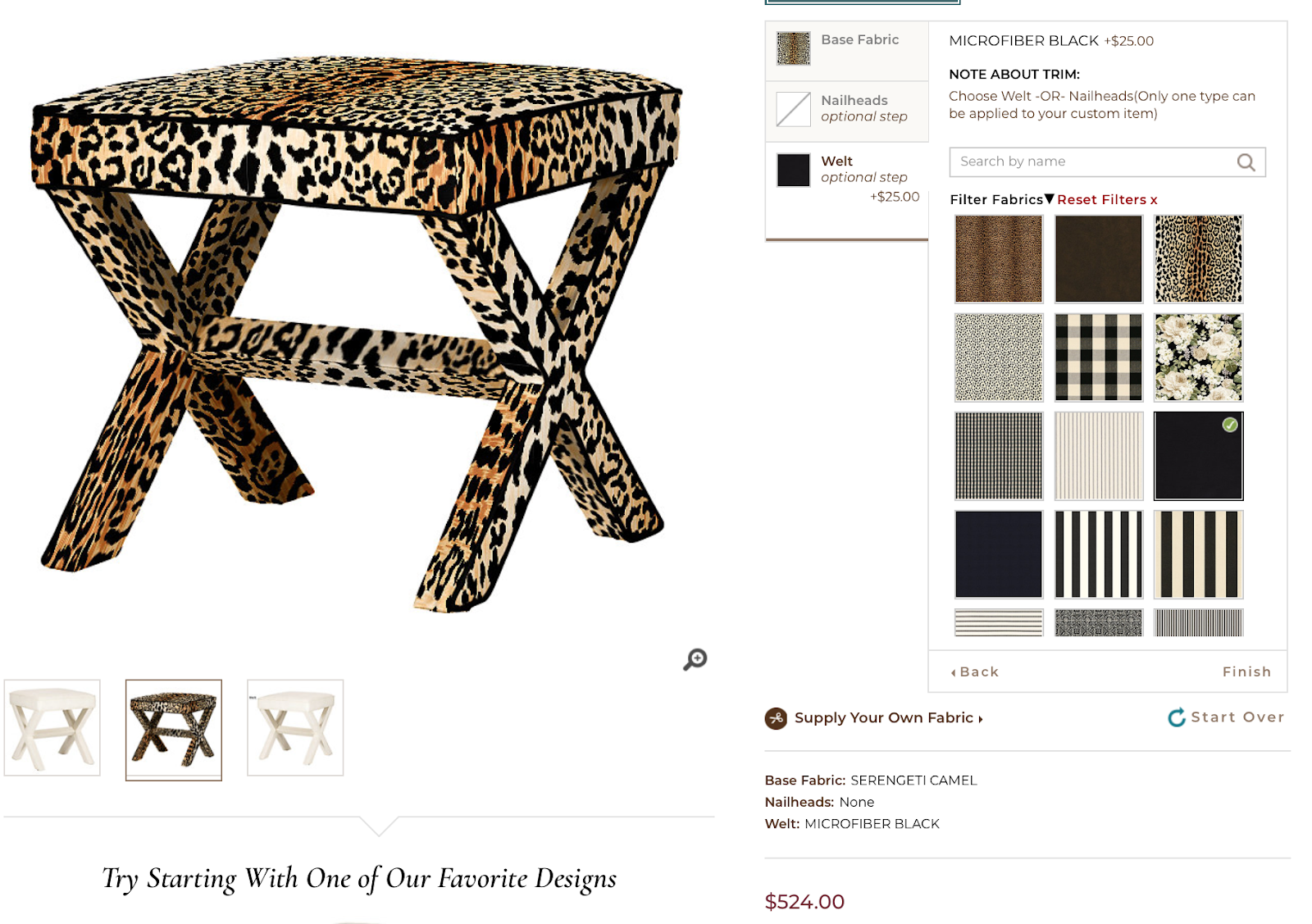 Now onto my curtain/drapery saga. I do love the black and white panels I got originally, BUT I felt it was very hard to decorate around them. Blue and white kind of clashed, and I craved a more subtle look for my windows since they’re backdrop to the dining/living room/kitchen space.

I ordered these pinch pleat panels from JCPenney, and while I thought for the price they were great, they skewed a bit to the cooler/blue side of the color spectrum (they’re almost a silver color) which clashed with my warm white walls and I’d like need twice as many panels for a fuller look. Back they went. (Note: I DO recommend them if you need affordable pinch pleat panels that slightly darken a room.) 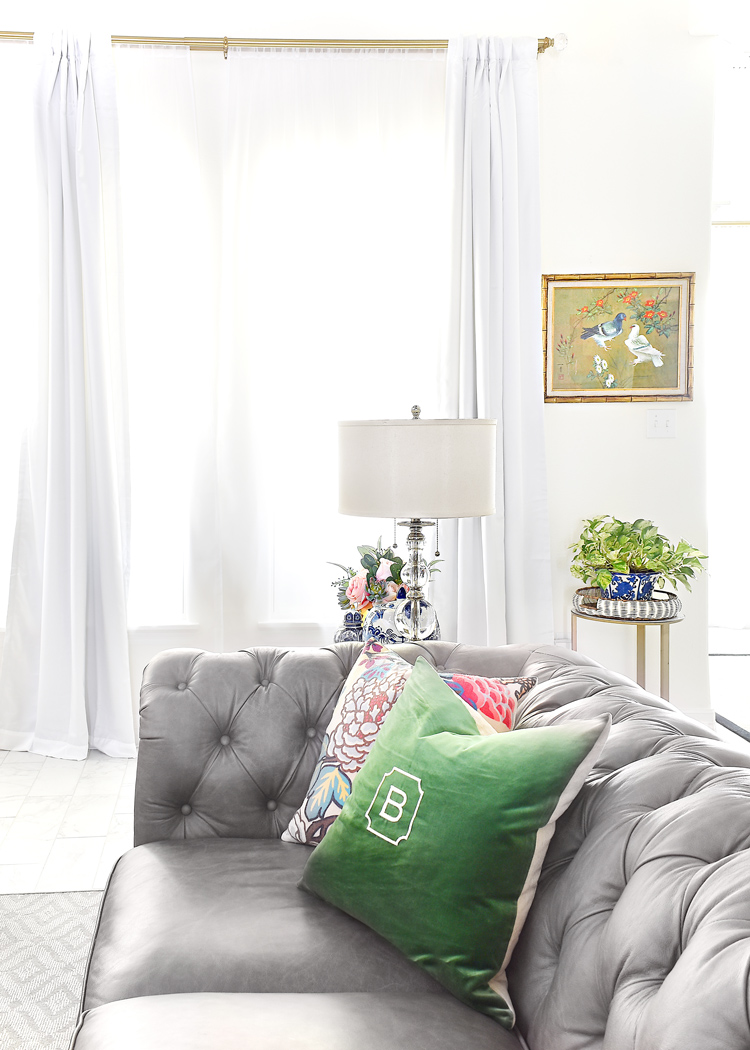 Then I ordered some off white faux silk ones from Amazon, and they had stains, but were otherwise so luxe and worth the $47/panel. But the stains… WHY IS THE UNIVERSE AGAINST ME? Finally my husband asked why I am so hell bent on white (it’s easy and looks classy?), and could I please literally choose any other color since it’s more forgiving. He’s right.

But now, I have no clue what drapery panels I want (other than trying to avoid any shade of white and also gray), and I do know I don’t want to keep buying and returning stuff. I feel like I’ve looked at every retailer I can think of and either I don’t find what I want, or it’s more than I want to spend (story of my life, you guys).

I did come across a photo yesterday that I feel accurately portrays the look/vibe I am after regarding wall color/drapery (even Daniel approved): 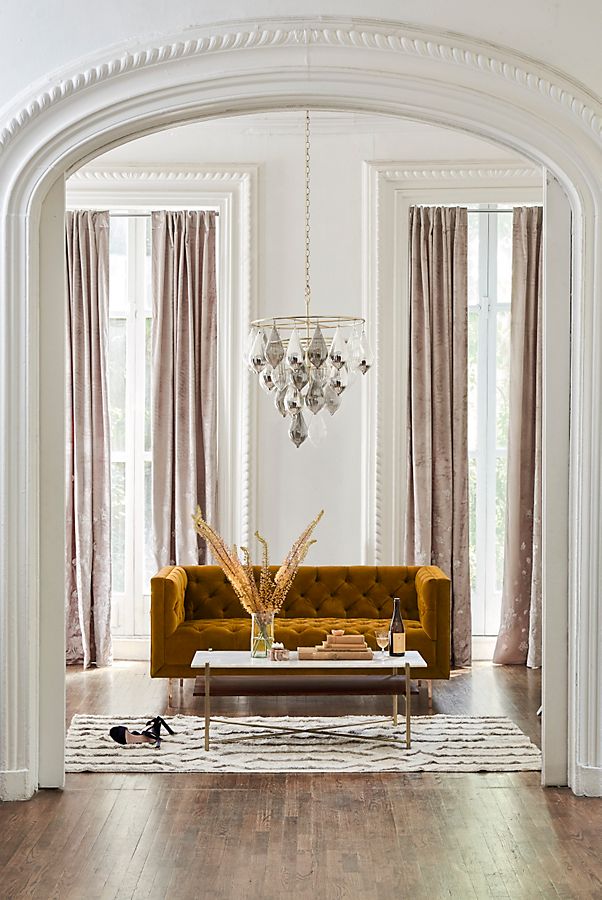 And the photo is from Anthropologie for these curtains, which would cost me $600+ for the three panels I need. Excuse me while I sob and take a sip of my Diet Dr. Pepper.

What would you call that color? Taupe? Champagne? I know I definitely don’t want beige or a light brown.

These from Pier 1 are kind of similar, but not quite, plus I don’t want grommets.

And that, my dear friends, is my update about my living room TV stand and curtain saga. I’ve been living in chaos with TV components on random small side tables and cords galore as we cope with the TV stand issue. Plus, now my curtain rods are naked while I figure out what to do.

This past weekend I got my fall craft on, so you can expect at least one tutorial a week from me in September with various fun pumpkin/fall type crafts (most are chinoiserie inspired for all you ginger jar lovers!) Cross your fingers all goes well with my fireplace delivery today. xo.