You are here: Home / baking / Outside the Box {Cupcakes}

Baking is super, duper popular and hip right now. And hey, if I was as talented as Bakerella, I’d be on the trend like white on rice. Alas, I am not. I make sweet delights that taste marvelous, but may not be considered couture art. Also, I don’t like having to buy 30 ingredients I do not have because I want to make cupcakes from scratch. That’d be expensive, sorry, but it would. But just mentioning the words “box cake mix” sends people into a frenzy thinking you’re obviously a poor cook and simply are not deserving of even living on earth. To hell you go!

This past weekend I was instructed to make some cupcakes for someone’s 21st birthday. I had grand plans of finding a gourmet, unique recipe on Tastespotting.com. And I did. And I would need to buy like 15 ingredients. I decided to use a box mix. GASP. I know, the nerve of some people! It’s cheap, and it’s easy. Sue me.

But there’s no reason that box cake mix can’t have a little oomph and a bit of pizazz, right? 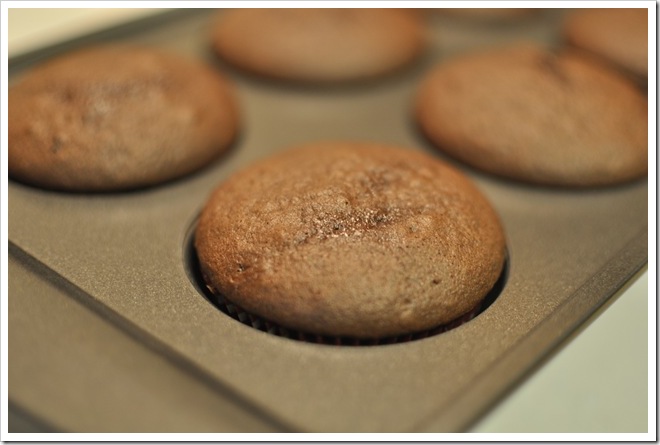 And my secret weapons… I bought some Pillsbury Easy Frost. I bought 1 vanilla & 1 chocolate. They have a star tip and are only $2 each at Super Wal-Mart, or $1.00 if you happen to snag a coupon in the Sunday paper. No canned icing + icing bags + curse words for me today! I have lots of frosting leftover and that’s because I made 18 cupcakes and used a lot of frosting. If you do buy these, DO NOT REFRIGERATE. Keep them at room temp. 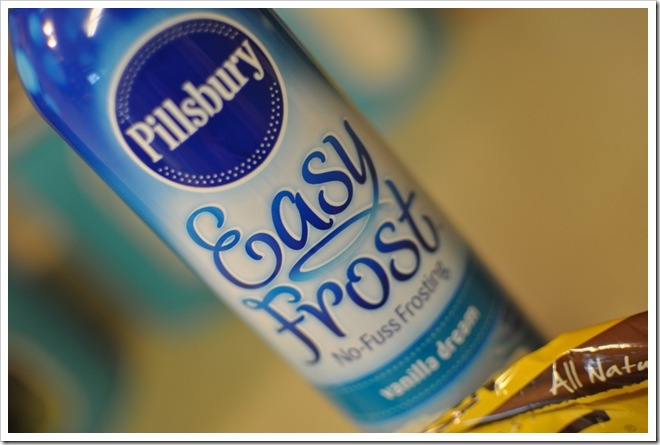 And I remembered I had some yummy mini morsels by Nestle. $2 or so a bag. 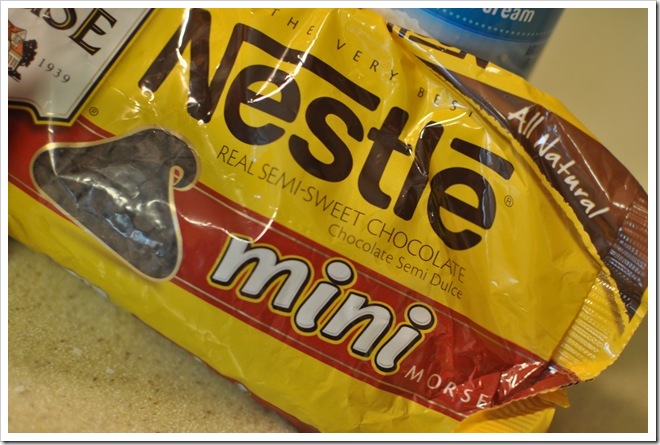 And finally, I have some edible shimmery pearls from Wilton that I snagged at Wal-Mart on clearance last Christmas for $2. 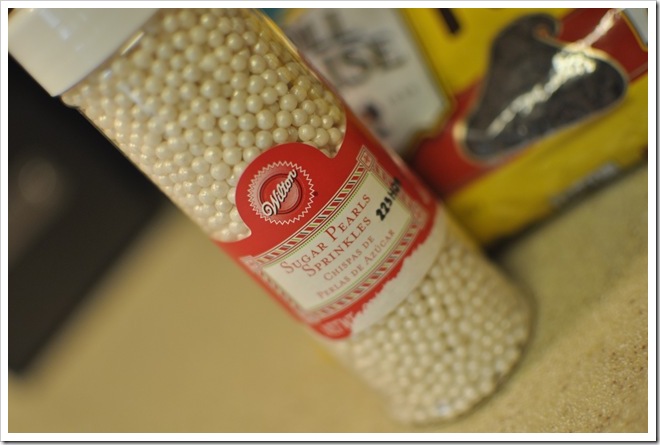 Usually, I buy the 99-can of frosting and just slap it on the cupcakes with a butter knife, but splurging on the Easy Frost allowed me to sort of make pretty cupcakes.

On the chocolate iced ones, I sprinkled a dash of pearls. 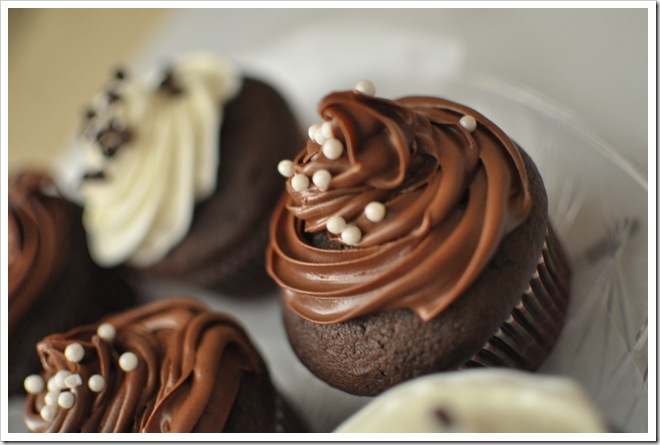 On the vanilla iced ones, I sprinkled some mini morsels of chocolate. 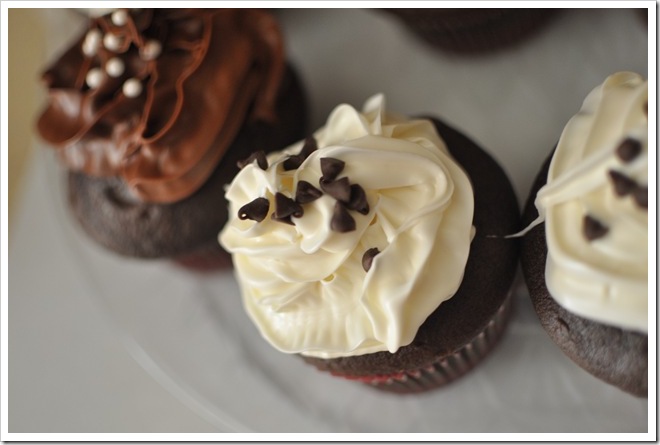 And now I have some pretty nice looking cupcakes that they think I was making from scratch. You won’t tell, will you? 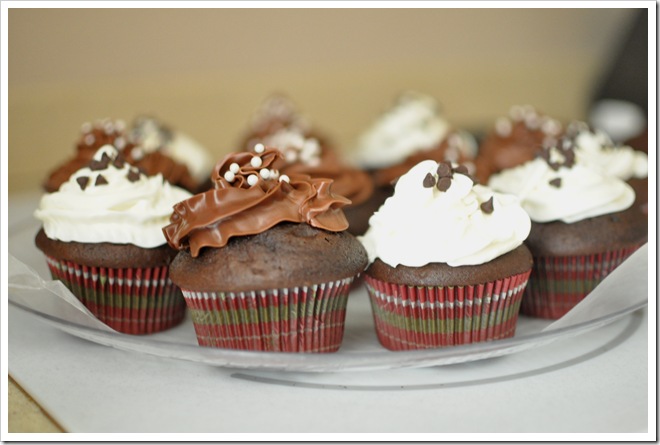 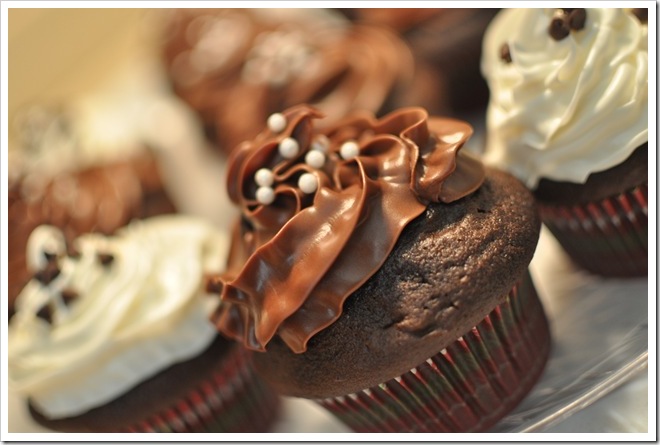 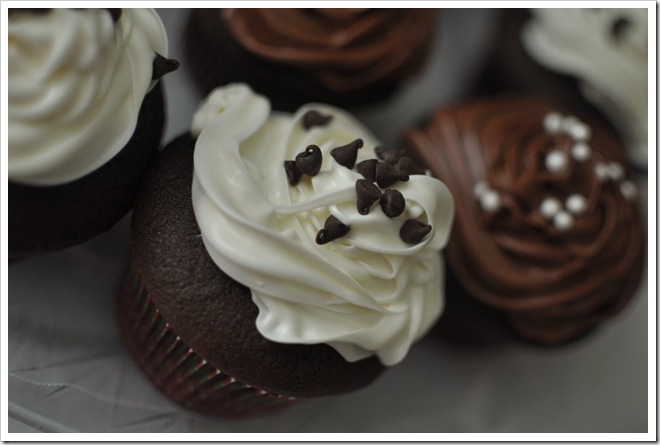 This holiday season, try easy stuff like this out. It’ll save your sanity & your pocketbook.

PS: Pillsbury, I love you.