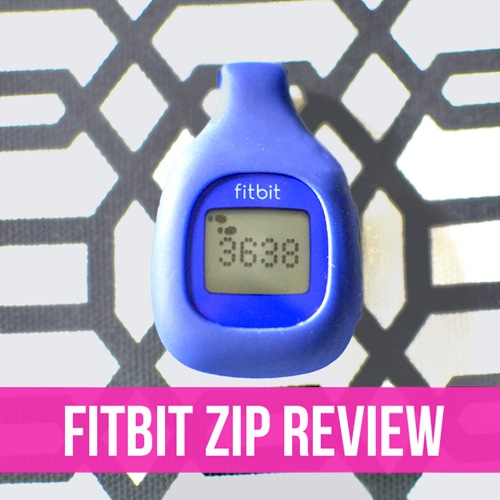 Hi everyone! I’m here to give you all my review of my new Fitbit Zip. Now, I will totally be upfront with you all about 2 things.

2.) I did so much research before buying this damn thing that it is SHAMEFUL.

So about #2… I was debating between a Bodybugg, Fitbit One, and the Fitbit Zip. I pretty much scratched off the Bodybugg from my list really quickly because they require a subscription fee to access all the data, and I found the armband to be rather obnoxious. I didn’t want it to be totally obvious that I was wearing a weight loss/fitness device, especially at work. Not that I am embarrassed, but I just didn’t want the extra attention or looks. No thanks!

Then I started debating between the Fitbit One and the Fitbit Zip. Now, without going into a ton of details, here are the main differences between the 2 devices:

-The Fitbit One tracks your sleeping patterns, stairs/floors climbed, and has a vibrating alarm to gently wake you up in the morning.

-Both track your steps, distance traveled, and calories burned.

At first, I was thinking of splurging on the Fitbit One, because hey for $40 I get a bit more data. Then I started thinking that I don’t really climb stairs (none at home or work), and that I don’t really think I would do much with sleep data. To me, my sleep is what it is. I try to get as much as I need, but I have a 99-cent sleep app that really gives me all the information I care to know.

So I finally decided on the Fitbit Zip. The MSRP is about $60, although Amazon has them at about the $50 range. Honestly, I am a total cheap ass because spending money STRESSES ME OUT. Like I seriously will agonize over $4 cosmetics at Walgreens. I guess it’s because I grew up that way, and I am still that way now. I call it thrifty.

I was at Target on my birthday, and I saw that they had the blue Fitbit Zip for $35…but they were all sold out. I checked my Target app, and sure enough both Targets we frequent were sold out. Curses.

Not one to be deterred, I checked the Target app again about a week later when we were in another city and BAM! They had 2. I snagged one up, and now I’ve had this little guy for almost 2 weeks.

Here’s what I love:

Here’s what I don’t love:

That’s pretty much it. I absolutely love this little gadget, and I think it would totally be worth the $50-$60. Will the novelty wear off? Hhmm. Maybe. I don’t know, I’m pretty determined to lose 100 pounds and have like 87 to go, so I think this will be a fun way to stay motivated and beat my previous weeks, etc. On the Fitbit website you can create a profile and add friends and such so you can get uber competitive if you want. Here’s the link to my Fitbit profile if you want to friend me.

I read some reviews that called this a fancy pedometer, and I would disagree. If you really drill down into the data and features, it’s truly a valuable health tool. You don’t even have to want to lose weight to find the data useful.

I guess the other bad thing is that now I really want the Fitbit Aria scale so I can really over analyze all the data!

If you have any questions, leave them in the comments or email me at [email protected] 🙂

Would you want a Fitbit Zip?